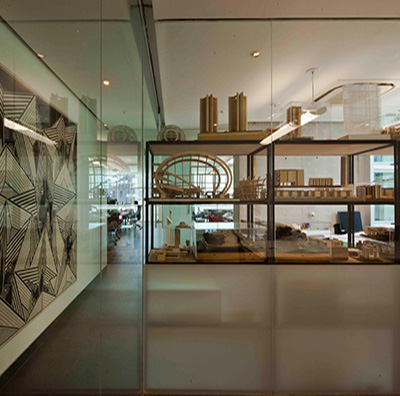 Landa + Martínez is an architecture design studio based in Monterrey, Mexico, headed by Agustín Landa Ruiloba (1980) and Rolando Martínez Rodríguez (1973). Landa + Martínez is one of Mexico’s most productive and innovative young firms. Its works bring together highly efficient plans and subtle adaptation to local contexts. Both Landa and Martínez collaborated with architect Agustín Landa Vértiz (1951-2015) as associates and project managers. Since 2015, Landa + Martínez has concluded many of Landa Vértiz’s works—including Pabellón M, Trébol Park and Reforma Latino—and completed or started a number of their own. Their designs includethe restaurant center Il Mercato in Saltillo, the Albia and Torre Ocampo office buildings in Monterrey, and Foro 4, a mixed-use complex in Leon laid out around a large public plaza. Landa + Martinez has been a leading firm in the transformation of Monterrey’s highly deteriorated downtown area. It has done this by promoting improvements to public spaces and pedestrian infrastructure, and by designing commercial and residential infills that increase density and bring new uses to the area. The large-scale Centro Cuauhtémoc, with apartments, office space and a commercial arcade, is the first of a number of works planned by the firm for central Monterrey